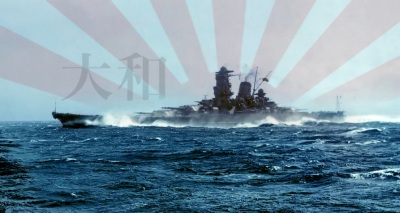 View Full-Size Image
Welcome!
“Yamato was a singularly beautiful ship, with a graceful sheer to her flush deck, unbroken from stem to stern, and a streamlined mast and stack” – Samuel Eliot Morison, History of US Naval Operations in WW2, Vol. 14, pp. 202.

Hello. I am a former US military officer with a life-long love of history, instilled in me by my father who fought against the Germans behind enemy lines in Nazi-occupied Europe for 3 years. He was also a History professor before the war.

I was always fascinated by the war in the Pacific.

Like my father, I got a degree in history, before graduating Northwestern Law School in Chicago and going into the military.

I found so many rare photos during my research into the ship that I decided to create an Internet Archive to make them available to everyone who is interested in Battleship Yamato, her sister ship, Battleship Musashi, and the War in the Pacific.

A FEW RANDOM THOUGHTS ON YAMATO - PART I:

Yamato only saw battle a handful of times during the entire Second World War. She was torpedoed by the submarine USS Skate in 1943, participated in the Battle of Leyte Gulf in 1944, was unsuccessfully bombed in March 1945 and finally fought and was sunk in the Battle for Okinawa in April 1945, where the pointless sacrifice of this ship and her crew cemented her place in the historical annals of doomed warriors.

Tantalizing evidence that, in a world without the dominant aircraft carrier, she may well have been the ultimate naval weapon that she was originally designed to be.

The Battle of Leyte Gulf is described further later on under accompanying photos.

None-the-less, Yamato and Musashi were strategically obsolete the day each was launched. A mere week and a half before Yamato's launch in December 1941, the Japanese had demonstrated the vulnerability of capital ships to carrier based air power at Pearl Harbor.

Despite going down in just over 2 hours of bombardment by US Navy planes off Okinawa on April 7th, 1945, this gigantic ship still captivates the imagination.

The story of Yamato's final mission is remembered in Japan in much the same way that Texans remember the Battle of the Alamo.

As a Japanese historian once noted - "once you learn the story of the Yamato, it becomes an obsession."

Yamato's mystique still resonates because her story touches on some of the most admired traits in human character - traits that cut across the ages, and across cultures.

Two millennia ago, King Leonidas and his Spartans fell to a man blocking the pass of Thermopylae long enough for the Greek armies to escape from the Persian onslaught. In ancient times, a tablet was erected there reading: "Go tell the Spartans, stranger passing by, that here, obedient to their laws, we lie."

Similarly, the Jewish defenders of Masada who held out for over a year against the Roman armies of Titus, before dying to a man, are remembered to this day for their heroism.

Likewise the defenders of the Alamo who fell during the Texian Revolution against Mexico.

In historical terms, willingly sacrificing oneself for one's country when there is no hope of victory - or even personal survival - is to earn what Theodore Roosevelt called "Deathless Fame."

So it was with the Men of Yamato - whose actions earned for themselves, and for their ship, the same "Deathless Fame" as the defenders of Thermopylae, Masada, and the Alamo earned before them.

Colorized photo courtesy of Irootoko Jr. I added the flag and the traditional Kanji symbols for her name.