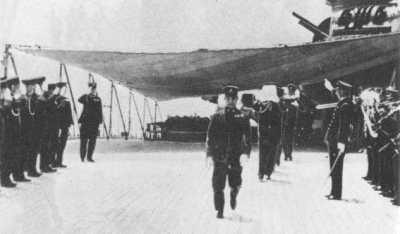 View Full-Size Image
Admiral Yamamoto' ashes on board Musashi, 1943.
It fell to Musashi to bring the Admiral's ashes back home to Japan following his death in the mid-air ambush of his plane over Rabaul by American P-38 Lightnings in 1943 (a feat made possible by the cracking of Japanese codes.)