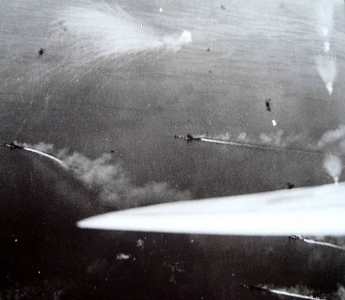 View Full-Size Image
Battle of Leyte Gulf and Japanese special AA shells
This photo captures Yamato (center of photo) and other ships of Center Force firing the "Sanshikidan" or "Beehive" shrapnel AA shells specially manufactured to be used against airplanes.

Equipped with a timed fuse that was set prior to firing, these shells would explode spraying thousands of ball bearings (in the case of Yamato and Musashi's 18" shells, up to a distance of a kilometer), which would bring down any planes within the kill zone.

The large blast with trailing smoke is probably from Yamato's 18" guns; the smaller blasts to the right of the photo are likely from the 5" AA batteries of Yamato or the other ships visible below.