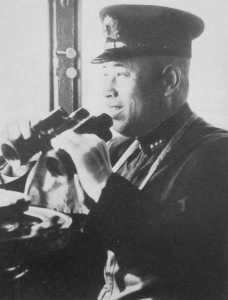 View Full-Size Image
Commander of the Combined Fleet, Admiral Yamamoto Isoroku
Admiral Yamamoto's HQ was initially on the Yamato in 1941-42, and was transferred to the Musashi in 1943 after her completion in the Summer of 1942.

Yamamoto was the Number 1 graduate in his Naval Academy graduating class. He was an exchange officer and spent time in the United States in the 1920s. He had a far keener awareness of America's industrial capacity and its people's steadfastness and will than most Japanese.

Therefore he was not in favor of a war with the United States; however, once the decision had been made, he set to work planning the daring attack on Pearl Harbor.

Through historical happenstance, the attack outraged the American people due to its being a "sneak attack".

However, it was the Japanese intention to break off negotiations and diplomatic relations with the US one hour before the bombs started falling. Unfortunately, the document that the Japanese Ambassador in Washington was to deliver to the Secretary of State on Sunday morning took far longer to translate from the code it had been wired in, and then to type up in English.

Thus, the Japanese envoys came to deliver it - several hours too late.

President Roosevelt knew that war with Japan was pretty much inevitable since the US imposed an oil and steel embargo on Japan earlier in 1941, over Japan's invasion of Indonesia. The Japanese, dependent as they were on US oil and especially iron and steel, considered this as being tantamount to an act of war.

War seemed inevitable by December 1941, but Roosevelt and the US Navy expected the Japanese to attack the US possessions in the Phillippinnes, not Pearl Harbor.

Roosevelt wanted to get into the European war in order to save Western Europe from Hitler. Therefore, although it was Japan that attacked the US, once Hitler foolishly declared war on the US a few days later, Europe became the central priority for the US war effort, with the Pacific War second.

Admiral Yamamoto is famously quoted as having said privately that "I fear we have awakened a sleeping giant and filled him with a terrible resolve" following the attack on Pearl Harbor.

In fact, this quote is apocryphal and there is no evidence that Yamamoto ever actually said it. What he did tell the Naval Chief of Staff was that after Pearl Harbor he could "run wild" in the Pacific for 6 months, but that after that "I have no confidence in success."

This was a prophetic statement; for it was almost exactly 6 months to the day after Pear Harbor, on June 5, 1942, that 4 of the 6 main Japanese aircraft carriers were sunk in an ambush attack by USN planes at Midway, turning the tide in the Pacific War and putting Japan in the unenviable position of having to fight a war of attrition against an enemy with vastly greater resources, population, and soon enough, superior technology as well.