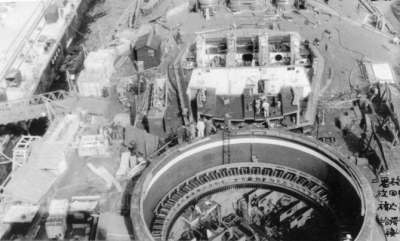 Note main turret #1 in front of the opening - farther along in construction, the base of the actual turret is mounted and the openings where the 18.1" rifles (guns) will be mounted can be seen.

For many of the most poignant never-before-seen photos of the Yamato during her final battle, I quoted liberally from Yoshida Mitsuru's poetic memoir "Requiem for Battleship Yamato". Be forewarned that some of Yoshida's descriptions of the battle are quite graphic and disturbing.

Yoshida was a 22-year-old ensign who happened to spend most of the final battle on Yamato's bridge, surrounded by Captains and Admirals. Surviving literally dozens of brushes with death on that single day, he lived to pen one of the greatest first-person accounts of the Pacific War. His book is one of the 3 works that are a must for anyone wishing to learn more about this great ship.

The following 3 books on the Yamato can be found on Amazon.com, ebay or elsewhere on the Internet by searching the names of the books and/or their authors:

2. Russell Spurr, "A Glorious Way to Die - the Kamikaze Mission of the Battleship Yamato - April 1945"; and

Skulski spent 20 years researching the Battleship Yamato, painstakingly piecing together scraps of her plans, photos, and ultimately produced the authoritative hard-cover book of the plans and diagrams of every inch of the Battleship Yamato. In recent years further Japanese research, particularly after the discovery of Yamato's wreck some some time in the late 1980s or 1990s, has updated some of Skulski's final arrangement of the Yamato's anti-aircraft guns as well as their number and the type of shields they were housed in; however this in no way detracts from his book, which is the bible for anyone wishing to understand how the Yamato was built and how it functioned. Anyone wanting to build an accurate model of this ship should read the above 3 books, as well as consult the recent Japanese diagrams of Yamato & Musashi I have linked on the index page, before embarking on the project.