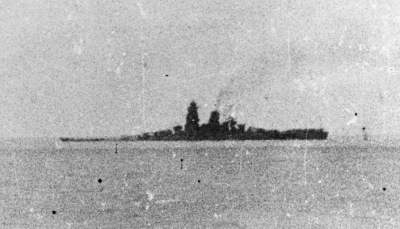 View Full-Size Image
Musashi Sinks
Musashi slowly going down by the bow. The Captain was ordered to try to beach the ship on a coral reef, and then use it as a 'gun platform' against American ships.

Because the ship's hull had been torn apart on both sides by 17 torpedo hits, the Captain hesitated to gun the engines for fear of capsizing the ship.

Moving at a snail's pace, Musashi made it half way to the reef before power was lost and the engines stopped.

By that time the entire front of the ship was underwater, with the two front 18.1" turrets standing above the water like two islands.

Shortly afterwards, the ship suddenly capsized to port, taking nearly half her crew down with the ship. A minute or two after the ship sank, a tremendous underwater explosion was heard by survivors.

The entire harrowing ordeal from the beginning of the battle to her sinking took an agonizing 9 hours to play out.