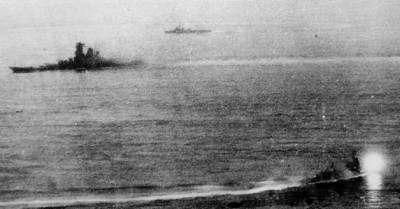 View Full-Size Image
Operation Ten-ichi-go, 6-7 April, 1944
"The fourth wave comes flying at us from the port bow. More than 150 planes.

Several torpedoes gouge sections out of the port side.

The attack on the bridge becomes ever fiercer.

After the planes release their bombs and turn from side to side, they press in directly at the bridge with all guns blazing...

Coming in again and again on the ideal approach, precisely, exactly, calmly, they evoke in us a sense of exhilaration. Virtuosi. Theirs is a strength we cannot divine, a force we cannot fathom...

Suddenly a heavy weight falls on me from three directions - front, rear and left side. The sailors in front of me and behind me and the officer on my left, all within elbow-rubbing distance, have been struck down simultaneously....

Those three bodies, of Ensign Nishio and the two sailors, saved me by shielding me from flying shrapnel. We were less than a foot apart.

My uniform is red in several places, dyes with spatters of blood."

(Note that Yoshida's reference to the "fourth wave" is mistaken. From the ship, it appeared as if the Yamato was subjected to 5 waves of attacks, but US Navy records show that there were only 3 concentrated attacks on the ship.)

As the Yamato enters her death agony during the third attack wave, burning and clearly down at the bow, moving at about 12 knots at best, one of her remaining destroyers (Fuyutzuki or Suzutsuki) fires a salvo at Navy aircraft from her front 10cm batteries.

Note also Navy planes above Yamato (several tiny black dots including a plane that appears to be dive bombing in the air above the ship's funnel.