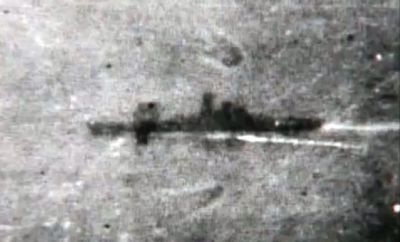 View Full-Size Image
Operation Ten-ichi-go, April 6-7 1945
1215 hours, April 7, 1945. The attack begins. Those black dots heading for Yamato are USN planes. Some exploding AA flashes appear visible on the right side of the frame, as does a possible flash from an exploding bomb on the aft deck. A couple of torpedo wakes may also be visible near the stern of the ship. Yamato appears to have taken a bomb or torpedo hit up front near the #1 main battery (a location that corresponds to two torpedo hits visible on the wreck of Yamato).

"A shrill voice: 'The enemy is using both torpedoes and bombs!'.. The tracks of the torpedoes are a beautiful white against the water, as if someone were drawing a needle through the water; pressing in, aimed at Yamato from a dozen different directions and intersecting silently.

Estimating by sight their distance and angle on the plotting board, we shift course to run parallel to the torpedoes and barely succeed in dodging them.

We deal first with the closest, most urgent one; when we get to a point far enough away from it that we can be sure we have dodged it, we turn to the next. Dealing with them calls for vigilance, calculation, and decision..

Before we know it, we have dodged several torpedoes; at last we take one hit on the port bow."