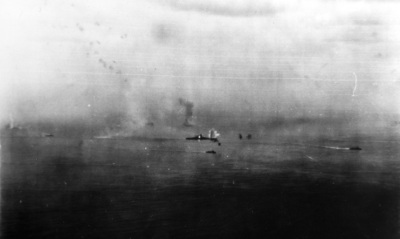 View Full-Size Image
Operation Ten-ichi-go, April 6-7, 1945
This photo captures the moment that one of the first bombs strike Yamato - right underneath the funnel on her superstructure, as several other bombs and/or torpedoes score near misses or a hit forward (see following photo for closeup).

Note flak bursts and geysers of water in the upper left of the photo, where either the Yahagi or one of the destroyer escorts is under attack and may have just been hit.