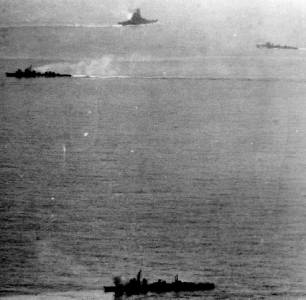 View Full-Size Image
Operation Ten-ichi-go, April 6-7, 1945
Yamato after the first attack is seen near the top of this photo.

The rear fire is clearly visible, as Yamato and several of her destroyers are seen zig-zagging to avoid US Navy bombs and torpedoes.

In the foreground, one of Yamato's destroyer escorts sits motionless, leaking oil, having been taken out of the battle during the first attack.

In the end, Yamato, cruiser Yahagi, and 5 of their 8 destroyer escorts would be sent to the bottom.

The Navy Archive caption under this photo reads: "Japanese Battleship Yamato burning but still under way following the first attack."