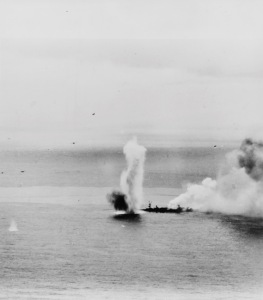 View Full-Size Image
Operation Ten-ichi-go, April 6-7, 1945
Still under bombardment, the Yahagi is going down fast. Note the US Navy planes above.

6 late arriving torpedo bombers from the USS Yorktown and another carrier saw that Yahagi was done for and instead diverted their attack to the heavily listing Yamato, delivering her death blow - as is described in more detail later.