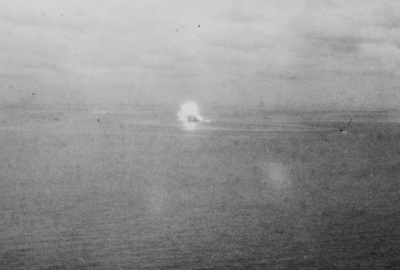 View Full-Size Image
Operation Ten-ichi-go, April 6-7, 1945
1423 hours, April 7, 1945 - the capsized Yamato explodes in what was likely the largest conventional explosion of WW2 - the explosion was visible more than 200 miles away in the port of Kagoshima.

Note the three surviving destroyers circling the ship. If you look closely at the base of the explosion the Yamato's overturned hull appears to be visible.

US Navy Caption:"The Japanese battleship Yamato explodes as she sinks, after receiving massive torpedo and bomb damage from U.S. Navy carrier planes north of Okinawa, 7 April 1945. The original photo caption reads: "A split-second shot of Yamato as she blew up. A red ball of flame envelops this mightiest of Japanese battleships, and a moment later it shoots like a comet to the clouds, 2000 feet high." Photographed from a USS Yorktown (CV-10) plane."