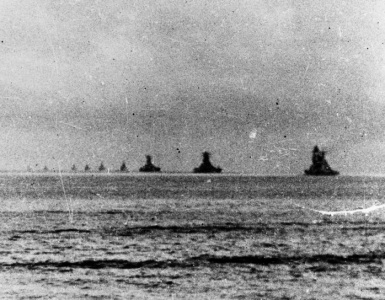 View Full-Size Image
The Fleet Leaving Brunei for the Battle of Leyte Gulf, October 1944
October, 1944. "Center Force", composed of about 40 ships leaves Brunei heading for the Philippines to attack the American invasion force. Battleship Nagato is at right, with Musashi and Yamato just ahead of it.

About 40 ships of "Center Force" would depart this day.

In the coming days the Imperial Japanese Navy would lose, in combat stretching across the Sibyan Sea and Leyte Gulf, all 4 remaining operational aircraft carriers, more than 400 planes, 3 battleships, 8 cruisers and 9 destroyers.

As a cohesive fighting force the Imperial Navy ceases to exist in October 1944.

Only Yamato, cruiser Yahagi, and 8 destroyers remained operational to take part in the suicidal "Operation Ten'ichigo" against Okinawa 6 months later in April 1945.