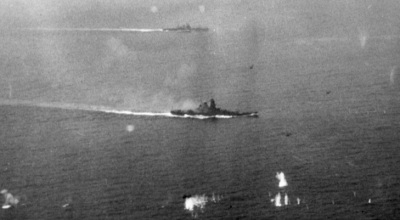 This larger resolution photo shows several USN planes swooping down towards Yamato on the right of the photo. AA flak bursts are visible in the air, as well as splashes of AA shells and machine gun fire on the surface of the water.

The main American fleet carriers were lured to the North by the willing sacrifice by the Japanese of their last 4 remaining carriers, which were promptly sunk, while the survivors of Center Force, including Yamato, made a feint towards returning home after Sibyan Sea, but turned around during the night of October 24-25 1944 and broke through to Leyte.