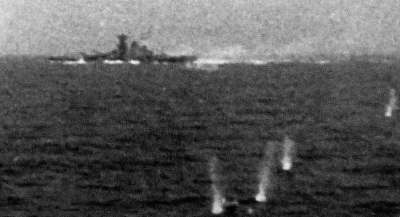 View Full-Size Image
Yamato at Battle of Leyte Gulf, October 1944
Yamato's anti-aircraft machine guns rake the water ahead of the US Navy plane.

The Yamato and the other ships which engaged Task Force Taffy 3 were under constant harassment from strafing planes flying off of Taffy 3's escort carriers (which mostly carried smaller bombs for support of US forces that had landed in the Phillippinnes. In the early battle some planes dropped depth charges in the attempt to slow the Japanese ships).

Noted Historian Anthony Tully chimes in with some answers to questions I posted on Tully's port about Yamato's performance at Leyte, as well as her final demise:

ME: Its worthy to add that Rob Lundgren's ongoing research may soon finally give credibility to IJN accounts of Yamato's alleged multiple hits scored at Leyte Gulf.

Tony: I have always felt that Yamato herself scored the hits on Johnston at 0730 (while Kongo hits Hoel), and that Yamato probably scored the killing straddle on Gambier Bay that flooded an engine room. (I can't remember if Jim Hornfischer worked this into his account when sent or not). Yamato also participated in some of the finishing shots at Hoel with secondary battery. In any case, the relative positions of the ships at Samar indicate this, but proof is lacking. In any case, Yamato should probably be credited with some hits, no question. (Worked this out for "Total Eclipse" in the 1990's - maybe will post the excerpt).

ME: The 7 bomb and 12 torpedo hits on Yamato in April 1945 in the official Navy report are also highly suspect, as they are contradicted by both survivor's reports and USN pilots' reports, the former indicating about 18 bomb hits and 20 torpedo hits, while the latter were roughly 3 x the numbers in the final Navy report.

Tony: That is no surprise, as that has been based on the immediate post-action DesRon 2 War Diary and report of the 2nd Fleet. I remember a series of forensic articles in `Warship' that examined a more likely truer number, oh, I think in the 1990's, maybe earlier.

ME: As an example, the death blow delivered by 6 Yorktown torpedo bombers almost certainly resulted in all 6 torpedoes hitting almost simultaneously, as they were dropped from ridiculously close range at a 10 knot-target.

Tony: Maybe not all six, but certainly "most" yes, as that attack is well photographed and convincing, agree. I don't recall what Garzke worked out, or even more importantly, that 1990's `Warship' study. I missed it, but its worth tracking down.

ME: Spurr reports them as having been dropped at a distance of 100 yards (though I wonder if it should have been 1000), while the official report lists 1-2 'probables'. Yoshida notes this explosion as being FAR more severe than any prior single torpedo hit, and correctly speculated that the bombers had taken aim at the ship's starboard exposed (due to list to port) underbelly. In any event she commenced her final roll over to port immediately after these hits.

TONY: Also true. As for Spurr, it may be a typo (or not, don't have info at hand)--- his work is excellent, and in the obscure matter of the sinking of Asashimo I determined by looking at the ARs involved that he used the San Jacinto report, and is paraphrasing it rather closely. So he can trusted in his general use of reports. The same goes for the famous Yorktown torpedo plane attack near the end you are talking about.

A note of explanation about the term "straddle": It refers to a multiple rifle shot that lands around the target without actually hitting it (ex. the Yamato's simultaneous 6 main rifle salvos at Gambier Bay for example); a 'straddle' shot - where the rounds land around the target and explode underwater - can be more damaging to a lightly armored ship like the Gambier Bay than a direct shot (many of which simply passed through without exploding due to the thin nature of Gambier Bay's armor skin.)

A 'straddle shot' exploding underwater near a lightly armored ship can generate such concussion waves as to breach that ship's hull creating immediate below-the-water-line water infiltration.

According to another source from Tully's port, the Yamato's initial two salvos 'straddled' the Gambier Bay, probably breaching her hull - and as Tony mentions above, a final straddle shot from the Yamato knocked out the Gambier Bay's steering/propellers, tearing holes open wider at the stern and dooming her.