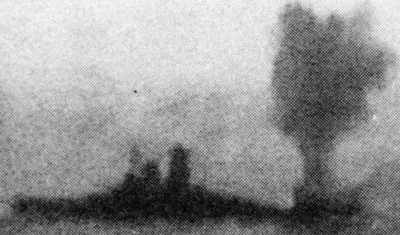 View Full-Size Image
Yamato Hit by Bomb, October 1944
On the way back from Leyte Gulf, Yamato is hit by two more bombs on October 26th, 1944. These do not cause serious damage.

Note the USN plane just above Yamato - either it has just dropped the bomb and is pulling away, or it is diving down on the ship.

Despite Yamato's successes at Leyte Gulf, the entire operation - known as "Sho-go" - is a catastrophe for the IJN which ceases to exist as a cohesive force, losing all 4 remaining operational aircraft carriers, more than 400 planes, 4 battleships, 8 cruisers and 9 destroyers during the operation.