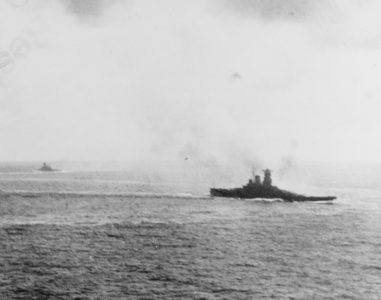 View Full-Size Image
Yamato off Samar, October 1944
Another battleship is steaming in the opposite direction to evade air attacks.

Note the USN plane visible to Yamato's left in the photo.

Yamato is steaming towards its rendezvous with USN Task Force Taffy 3, and her sole ship-to-ship combat operation of the war.

US Navy Task Force Taffy 3 was supporting the invasion of the Phillippines and was not equipped to attack capital ships. It was composed of a number of light escort aircraft carriers and destroyers.