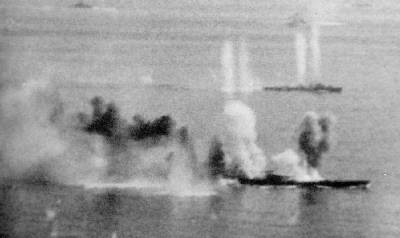 View Full-Size Image
Musashi Under Fierce Bombardment, Sibyan Sea, October 1944.
Slowed down by her damage, here the Musashi is hit by a 'scissors' attack - airborne torpedoes launched simultaneously from both sides, with dive bombers hitting the ship from above.

Note the destroyer in the background, which has just barely escaped being hit by rockets fired from US Navy planes.