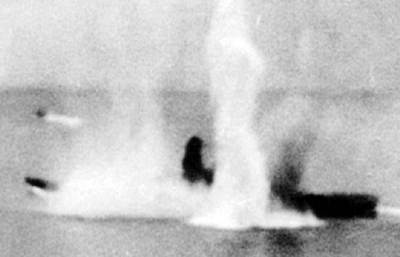 View Full-Size Image
Operation Ten-ichi-go, April 6-7, 1945
"Twenty torpedo tracks head toward Yamato. We take three hits on the port side. In the neighborhood of the aft tower."

"The overwhelming number of torpedoes has made it impossible, even with this ship's agility, to dodge them all.

A veritable circle of fire closes in on us: from above, from all points of the compass, glistening."

A description of the battle during the second attack wave, by which time the Yamato has already sustained heavy damage from multiple bomb hits described earlier.

Note: The torpedo strike in this photo - the plume of water rising about 50 stories above sea level - appears to depict the impact of one of the three hits described by Yoshida. If you look closely, a faint torpedo wake appears to be visible, leading to the point of the geyser of water. The smoke from the aft fire caused by the explosion of 6" Turret #2 is also visible.

Learning from the 9 hours it took to sink the Musashi 6 months earlier, the US Navy pilots are instructed to aim all of their torpedoes at one side of the ship (it turns out to be the port side), additionally aiming for the more lightly armored bow and stern sections. By creating massive flooding on just one side of the ship the idea was to make her capsize more quickly. It worked. It did not help matters any that a bomb knocked out the pumping control room during the second attack wave, making it impossible to flood the special exterior starboard compartments ('bubbles' ) that were meant specifically to help the ship keep her trim in just such an event.

In desperation, the aft starboard engine and boiler rooms are ordered flooded instead. This move rights the ship initially and buys her perhaps an additional 30 minutes of life, but cuts her speed in half to about 12-13 knots, at the cost of the lives of hundreds of sailors in those compartments, most of whom probably did not have time to get out once the alarm was sounded.