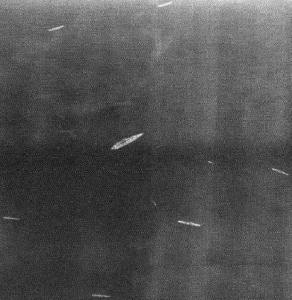 The Yamato is in the middle, with the light cruiser Yahagi and 5 out of her 8 destroyer escorts clearly visible forming a ring around the ship.

They would leave on their final suicide mission a mere 4 hours later.

From the US Navy summary of the operation: "Soon after Okinawa was invaded on 1 April 1945, the Japanese implemented a desperate effort to destroy the fleet supporting the landings. Designated "Ten-Go", this operation largely consisted of massed "Kamikaze" suicide plane attacks. However, the battleship Yamato, largest surviving ship of the Japanese Navy, was also to play a role, steaming down from the home islands to blast invasion shipping off Okinawa's western coast. This mission was also understood to be suicidal, and only enough fuel was provided for a one-way cruise. (Note: subsequent research has proved this claim to have been a myth. The Yamato and her escorts did indeed have enough fuel for a round-trip voyage, although even many of her crew were unaware of this fact.)

Yamato and her consorts, including the light cruiser Yahagi and eight destroyers, left port in mid-afternoon on 6 April 1945, the day that the "Ten-Go" suicide planes began their all-too-horrible onslaught. While exiting the Inland Sea, the ships were twice sighted by U.S. submarines, and were again seen by a carrier search plane in the morning of the 7th.

U.S. Navy carriers launched nearly 400 aircraft to hit the oncoming Japanese ships. Six U.S. battleships prepared to intercept the Japanese, in case they somehow got past the overwhelming aerial force. The Yamato group was provided with no air support, so the U.S. planes were opposed only by generally ineffective anti-aircraft gun fire."