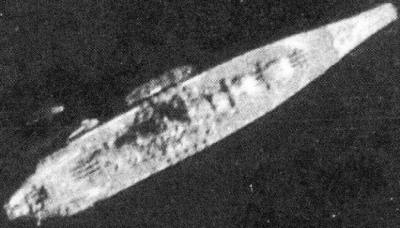 View Full-Size Image
Operation Ten-ichi-go, April 6-7, 1945
Close-up of a remarkable high-altitude recon photo taken by a B-29 at precisely Noon, April 6, 1945, that was discovered in 2005 in the National Archives.

The photo shows the ship's final deck AA gun configuration as well as other features. Note the ships moored alongside delivering men and supplies.

The ship would leave on her final suicide mission a mere 4 hours later.

Both Vice Admiral Ito, the task force commander, and Rear Admiral Ariga, the Yamato's captain, were so strongly opposed to the "special attack" (suicide) mission - Operation Ten'ichigo - that they risked being relieved from duty. In the end, however, they carried out their orders, and ultimately went down with the ship.

The most insane kamikaze mission of the war occurred because of a chance comment from Emperor Hirohito; while being briefed by his Army, Air Force and Navy Chiefs of Staff on the upcoming defense of Okinawa, he turned to Admiral Toyoda, and remarked "Have we no more ships?"

Thus the Navy's brass hatched the insane plan to send the Yamato, the light cruiser Yahagi, and 8 destroyers to certain destruction in a vain attempt to engage the American landing fleet off Okinawa - without any air cover of their own.

Vice Admiral Ito was only persuaded to drop his opposition when he was told by Admiral Kusaka while being briefed on the operation that the Yamato would divert American air forces away from the thousands of kamikaze planes that would be unleashed against the American Fleet from bases on Okinawa.

The world's greatest battleship was thus reduced to being nothing more than the world's biggest decoy.

Those who think that Pres. Truman shouldn't have dropped the A-bombs ought to ponder that last remark. The Japanese had prepared their population and home forces to fight to the death - even if it meant the death of every single Japanese. Dropping the A-bombs saved far more Japanese lives than American ones by preventing the need to invade Japan in September 1945 (the month for which the invasion had been scheduled). US estimates of casualties in an invasion of the Japanese home islands - based on the experience of Okinawa - were 3 million US casualties and 10 million Japanese casualties.

When President Truman first learned of the existence of the A-bomb and was considering its use against Japan, The Secretary of War asked him a pointed question: "What will you say at your impeachment trial in the Senate in 1946, Mr. President, when you are asked why, having this weapon, you decided not to use it?"