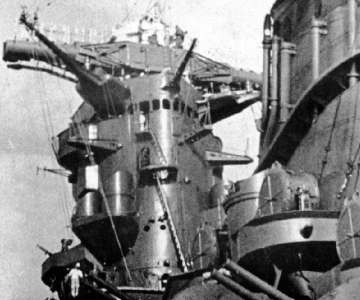 This 1944 photo shows the radar antennae on top of the main fire control director.

The windows just underneath the masts near the top of the tower are to the main bridge where Yoshida spent most of the final battle; Incredibly, although equipped with massively thick bullet proof glass windows, the port holes on the bridge were kept open during the battle, as the Bushido Code demanded that the bridge crew be exposed to the same dangers as the unprotected machine gun crews on deck below.

This stupidity caused dozens of needless casualties on the bridge, vividly and graphically described by Yoshida in his book.

As he put it, each time that chunks of torn flesh and bodies were removed from the bridge, bloodstains remained on the floors and walls, "like birthmarks".