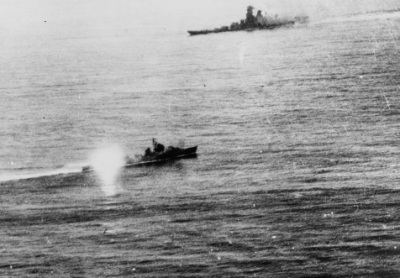 View Full-Size Image
Operation Ten'ichigo, April 6-7 1945
In the middle of the final wave.

"Japanese battleship Yamato (top) and a destroyer in action with U.S. Navy carrier planes north of Okinawa on 7 April 1945. Yamato appears to be down at the bow and moving slowly after being hit by multiple air attacks.

The destroyer is either Fuyuzuki or Suzutsuki, and appears to have fired her after 10cm guns at the instant this photo was taken."

This is a high resolution photo - make sure you open it to full size.