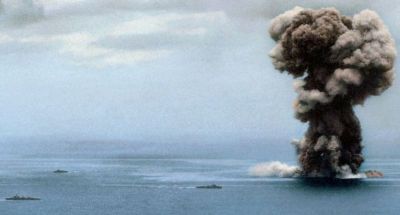 View Full-Size Image
Operation Ten-ichi-go, April 6-7, 1945
Escaping from the bridge, which was parallel with and dipping into the water, Ensign Yoshida is sucked down by the sinking goliath;

"The ship is already completely under water; I am in the whirlpool...

First, the fore magazine explodes. Twenty seconds after the ship went under?

Had there been no explosion, I would have sunk rapidly in the whirlpool, to the bottom of the sea.

At the instant Yamato, rolling over, turns belly up and plunges beneath the waves, she emits one great flash of light and sends a gigantic pillar of flame high into the dark sky. Armor plate, equipment, turrets, guns - all the pieces of the ship go flying off."

US Navy Caption:"Japanese battleship Yamato blows up after receiving massive bomb and torpedo damage from U.S. Navy carrier planes, north of Okinawa on 7 April 1945. Three Japanese destroyers are nearby."

Note that one of the destroyers is leaking oil and dead in the water. The other two are the Fuyutzuki and Suzutzuki.

The Captains of the Fuyutzuki and Suzutsuki refused the order to come alongside the Yamato in her final moments in order to transfer her crew due to their fear of having their vessels dragged down in the Yamato's huge whirlpool as she sank.

It turned out to have been the correct decision. Had they obeyed the order, both ships would have perished in the explosion.